Preface: Shakespeare’s dark tragedy “Julius Caesar” mirrors ever shifting landscapes underlying pomp and power in government.  Having been stabbed in the back by his Senators and left to bleed out, Caesar cried in agony, “Et Tu, Brute?” … “Even you, Brutus?”  Yes … even Brutus, Caesar’s trusted friend and “angel,” was among the traitorous elite Goodfellas who coveted, conspired and committed the irredeemable.  Caesar’s beloved General Marc Antony proclaimed Brutus’ treachery as, “the most unkindest cut of all!”  Unfolding hereafter is a classic replay of “the most unkindest cut of all” that we allege is conspiracy to deceive a serving President of The United States of America. 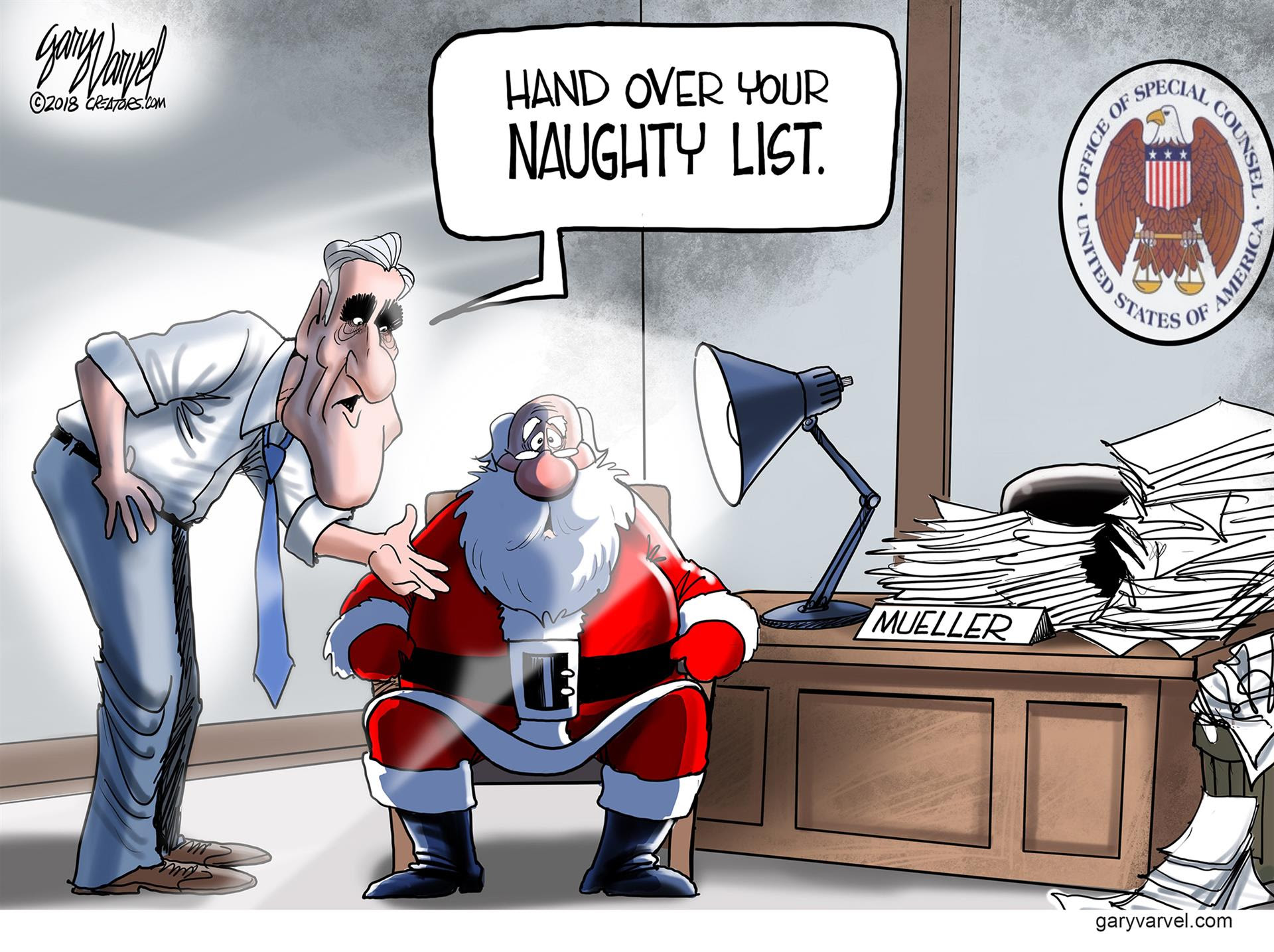 Senator Orrin G. Hatch is NOT your friend!

In the rural America of by-gone days, railroad crossings were forewarned to drivers by a mere wooden sign with the words, “Stop, Look and Listen!”  Unfortunately for many who did not heed the warnings, their auto and personal body parts were often left pasted to the front of locomotives and strewn piecemeal down the tracks.  Most of the old signs have since been replaced by lights, warning horns, bells, whistles and long sturdy bars to the tracks … bars that descend well in advance of oncoming trains.

Having lacked the capacity to reach out and warn President Trump in advance, we warn in arrears of the hazards associated with his proximity to Senator Orrin G. Hatch.  For the following reasons, we wish to have had the horns, bells, whistles, lights and long sturdy bars that would have saved the day in the advance of the oncoming Hatch and others.

… have been hooked at the hip since the 1990s.  Suffice it to say, Mueller is the significant Pariah, Deus ex Machina, Machiavelli, Rasputin, Judas Goat, Bane and Brutus that currently plagues our divided Nation.  See “13 Shocking Facts….”  Hatch is Mueller’s confidant and equal.  We will demonstrate evidence of that. Both, when teamed together, are like two backyard chiggers crawling into the darkest sweaty recesses of the Government’s hide … itching to be embedded in every corrupt opportunity available therein.

Here is the history.  The Bank of Credit and Commerce International (BCCI) began to crumble under the weight of considerable criminal activity even before the 1990s.  BCCI was characterized at the time as the most corrupt bank in the history of the World. BCCI had folded the CIA, the covert activities of other similar National and International agencies, drug trafficking, arms dealing, money laundering, and high level international political corruption into its portfolio.  Surprisingly, Chief of the U.S. Justice Department’s Criminal Division Robert Swan Mueller III stepped out in front of all legitimate investigations and did damage control for BCCI and its corrupted, Deep State minions … Hatch among them.

When a few prosecutors finally began targeting BCCI’s operations in the late Eighties, President George Herbert Walker Bush boldly moved in with a federal probe directed by Justice Department investigator Robert Mueller. The U.S. Senate later found that the probe had been unaccountably ‘botched’–witnesses went missing, CIA records got ‘lost,’… Lower-ranking prosecutors told of heavy pressure from on high to ‘lay off.’ Most of the big BCCI players went unpunished or, like [Khalib bin] Mahfouz, got off with wrist-slap fines and sanctions. Mueller, of course, wound up as head of the FBI, appointed to the post in July 2001–by George W. Bush.

… In 1990, U.S. Senator Orrin Hatch presented an impassioned defense of the bank (BCCI) in a speech on the Senate floor. He and his aide, Michael Pillsbury, were involved in efforts to counter the negative publicity that surrounded the bank, and Hatch solicited the bank to approve a $10 million loan to a close friend, Mazur Hourani.

Excerpting from “Lawmaker’s Defense of BCCI Went Beyond Speech in Senate,” Hatch’s speech in defense of BCCI was written by the bank’s officer Robert Altman.

Altman and his partner Clark M. Clifford, a former Defense Secretary, were charged with taking bribes from BCCI.

After Hatch was caught with his knickers down for attempting to solicit a $10 million bribe from BCCI, he worked overtime to alibi out of it.  One such attempt can be seen in the video found here https://goo.gl/PPpGzB

The Senate Ethics Committee cleared Hatch of wrongdoing in BCCI and he will likely “trot this out” as proof of his exoneration.  We don’t buy it. Hatch’s sleazy record speaks for itself but to detail it here would deflect from our purpose.  Likewise, the integrity of the Senate Ethics Committee is justifiably under fire. See “HOUSE AND SENATE ETHICS COMMITTEES PROTECTING THE MOST CORRUPT MEMBERS OF CONGRESS.” The Ethics Committee has often been characterized as a “Toothless Watchdog.”  We agree. Our own personal experience with Hatch and a Google search regarding his corrupt conduct also yields information convincingly sufficient.

Mueller “deep sixed” the BCCI investigation and prosecution.  Hatch escaped prosecution and censure for his BCCI conduct and shortly thereafter Mueller was confirmed as FBI Director by a Senate panel led by Leahy (on the BCCI bribes list ) and championed by Hatch (also on the BCCI bribes list ).  The Senate’s record of Mueller’s confirmation hearing is a long read. There were no dissenting votes which makes one wonder just how many other Senators were also on the BCCI bribes list , or otherwise compromised or leveraged by Mueller, Hatch, and Leahy.  The sweet syrupy, effusive commentary from Hatch at the hearing would have gagged a maggot. The hearing was a communal exercise in back slapping and scratching while slobbering all over each other.

But that was then and this is now. …

Most recently, Hatch has conjured a sly, quid pro quo coup in exchange for his support of the President’s tax plan.  Hatch has managed to “play” (con) the President like puppet master Edgar Bergen pulled strings on Charlie McCarthy and Mortimer Snerd.  Hatch snookered the President and secured the downsizing of Utah’s Bears Ears freeing up a cornucopia of strategic resources for exploitation by a far flung, Global cartel.  The reader can see more details of this machination by visiting “Hatch’s Inc.”  The full import of this is also in the details of another report.

More tellingly and currently, Hatch and Mueller share a Mole in the person of Peter Carr.  Carr, a Bountiful, Utah native who previously worked as press secretary for Sen. Orrin Hatch, serves as Mueller’s spokesman. We repeat … Hatch and Mueller are hooked at the hip.

Hatch has repeatedly opposed the call to fire Mueller.

Hatch is NOT your friend!  You have been conned by him!

Thank goodness you were “savvy” about Romney from the beginning.

3 thoughts on “Mr. President … Senator Orrin G. Hatch and his confidant Robert Mueller are NOT your friends!”