“Investigative Bulletin: The Murder Curtain” in VA Hospitals where Veteran patients were murdered in cold blood!

Are Veterans Administration hospitals the perfect hunting ground for serial killers? That’s one of the provocative suggestions in former VA special investigator Bruce Sackman’s new book, “Behind the Murder Curtain.”

Sackman was the special agent in charge of the VA’s Criminal Investigation Division’s Northeast Field Office, chasing crime from West Virginia to Maine. A maverick, he bucked the system and brought two prolific serial killers—Michael Swango and Kristen Gilbert—to justice. Both murdered veterans at VA hospitals.

“There have been plenty of hospital serial killers in the private sector throughout history,” Sackman writes. “But it sticks in my mind that a VA medical center is a perfect hunting ground. The VA facilities are filled with long-term care patients with serious debilitating illnesses,” making them easy marks for medical serial killers. Often, patients are isolated and vulnerable, with visits from family members few and far between.

“Behind the Murder Curtain,” co-authored with Michael Vecchione and Jerry Schmetterer, unfolds like a police procedural, taking us through the Swango and Gilbert cases. The authors make quick stops at other cases and offer a smart program for spotting trouble. 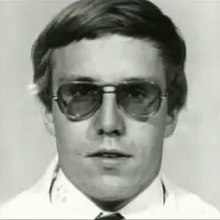 Sackman estimates that Swango, a doctor, killed as many as 100 patients in the United States and Africa. Swango began practicing medicine in 1983 and drifted from hospital to hospital, dogged by reports of fraud and improper behavior. By 1995, he was at the Northport VA Medical Center in New York. A television news program raised questions about his past. Medical personnel at Northport were concerned.

Sackman caught the case. But he faced resistance. Allegations of killings at hospitals were largely uncharted investigative territory. The FBI considered murder on federal turf to be their territory, but had little experience with hospital cases. VA law enforcement usually focused on white-collar crimes like embezzlement and fraud.

Was Sackman out of his league? He persisted, put together a team of experts, including famed forensic pathologist Michael Baden, and ultimately was instrumental in convicting Swango on multiple murder counts and sending him to Colorado’s Supermax prison for the rest of his life.

In a chilling image, Sackman writes that most hospital killings occur behind “the murder curtain” surrounding a patient’s bed. Medical records and documents “revealed a pattern of behavior by Doctor Swango at his patients’ bedsides: he entered their rooms by himself, drew the curtains, and administered lethal injections.”

Kristen Gilbert, a nurse at the Northampton VA Medical Center in Massachusetts, also committed her killings behind the murder curtain. It began with the theft of epinephrine from the hospital medical cabinet. Swango also used “epi,” a common drug to speed up the heart rate, but fatal in high doses.

Like Swango, Gilbert worked the overnight shift. “When the ward was empty of other personnel,” Sackman writes, Gilbert “would pull the bedside curtain around her. She would then inject the patient with a fatal dose of the drug.” In an attention-seeking twist, Gilbert would often be on hand when the patient “coded”—began to go into cardiac arrest and die—taking seemingly heroic measures to save her victim.

Hospital killing cases are tough to make. In the Gilbert investigation, Sackman writes, “We would need to count those missing bottles of epinephrine, prove that Gilbert had access to them, prove they were administered to the patients in question, and finally, prove they died from those injections. We had to paint a picture for the jury that, given the opportunity and the resources, Kristen Gilbert would draw the curtain around her patient, and for the thrill and glory, administer a dose of fatal poison. “

Nurses are Sackman’s heroes, on the front lines of patient care night and day. Three concerned nurses at the Northampton VA first raised the alarm about Gilbert—a tough call to make about a colleague in the tight world of medical personnel.

Nurses also first raised the alarm about healthy patients dying under Swango’s care. Early in Swango’s career, “nurses reported their concerns, but the administration conducted a very superficial investigation and then dismissed the complaining nurses as paranoid,” Sackman writes. “This was a pattern I would see often…. Hospital brass never wanted to hear bad news about their doctors. Too often, they were willing to cover up in order to save face.”

Sackman retired from the VA in 2005 and works as a private investigator and consultant, specializing in healthcare matters. (He’s also president of the Society of Professional Investigators, where I am a member.) Suspicious hospital deaths, he writes, are “a problem that afflicts every type of hospital, public or private.”

Sackman notes that “hospital managers have a well-documented history of defending employees suspected of intentionally harming patients. They are afraid that bad publicity and potential lawsuits will follow formal investigations, especially if conducted by outside authorities like a district attorney. When the police or DA get involved, a record of their activity is a public record. The media will find out about it and sensational stories will result. They are right to fear that but sweeping the problem under the rug is not a solution.”

A better solution, Sackman believes, is the adoption of what he calls “Red Flag Protocols” by nursing and medical schools to help identify possible medical serial killers. Sackman has presented his protocols at healthcare symposiums around the world and outlines them in the  book.

Is there an increased rate of patient deaths connected to the suspect? Does he (or she) work a late-night shift and frequently is alone with patients? Is the patient’s death unexpected and attributed to a “catchall like cardiac arrest?” Are “sudden-death” chemicals available on the ward? Do colleagues have concerns about the suspect? Was the suspect with the patient before the patient’s death? Do records of prior employment show questionable incidents? Does an initial review by management find insufficient evidence to proceed?

Those are some of the questions raised by Sackman’s Red Flag Protocols. “Most importantly,” Sackman writes, “hospital brass must listen to their staff when allegations are made.” Michael Swango, Kristen Gilbert and others, he notes, “were left free to kill even after hospital brass was warned.”